My Own Personal "Firewall"!

July 31st started out as a cloudy day. But that soon changed. There were high winds with  thunder rumbling in the distance. Not long after that the rain started hitting very hard against the windows. I decided to go sit with my kitties downstairs and do some hand quilting! Not a bad thing for a rainy day - Kitties & Quilting. 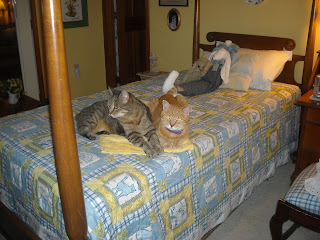 However, things soon turned ugly. The wind continued to increase and so did the rain. Lightning began flashing every few seconds. It was definitely time to move to an inside room. So I gathered kitties and we headed into the guest room. Sage and Bamboo made themselves right at home on the bed while Baby D did some exploring. (More about the quilts on the bed in another blog.)

I took out my stitching and began piecing my blocks together. About that time there was a loud pop and the lights flickered. The cats dove under the bed and I tried to do the same thing! We huddled there for a few minutes staring at each other. They couldn't figure out why I wasn't completely under the bed with them. I didn't fit!!

The storm seemed very close and very loud, so I gathered them up and we all went inside the guest bathroom which is the door behind the bed in the picture. I closed the door and we hunkered down for quite awhile. Needless to say I had left my stitching in the other room. I think I threw it up in the air when I did the nose dive.

We stayed there until things quieted down. At last the thunder and lightning was over, but there was very heavy rain and it sounded like it was raining in my house. Leaving the kitties behind, I peeked out the door and then headed upstairs. The rain was getting louder and louder. When I got to the top of the stairs, I saw that my front door had blown open and it was raining in my house. I slammed the door and threw some towels on the floor. Fortunately it is a tile floor, so no harm done.

However, when I turned around and looked at my living room wall, it looked as if someone had used a black can of spray paint to decorate. Well not exactly. The lightning had struck a temperature gauge on our roof which was connected to a weather station in the living room. (Little black box on desk below.) It traveled down the wire and left its mark. There it was - my own personal firewall. 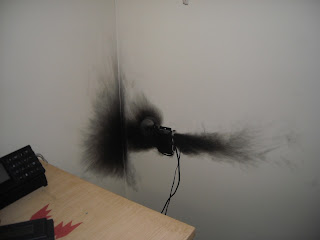 I called the fire department to make sure nothing was smoldering anywhere. After several hours, they found that everything was ok. The firefighters couldn't believe how fortunate we were as they had already responded to two houses with similar lightning strikes that morning. One house was completed gutted and the other house was not much better after the strike.We are indeed fortunate.

We have been checked out by electricians, claim adjustors and are now waiting on roofers. It seems to be quite an ordeal.

But life goes on despite the thunder and lightning and the falling rain. Some of my "neighbors" really don't mind the rain. They like to watch it from their doorway! 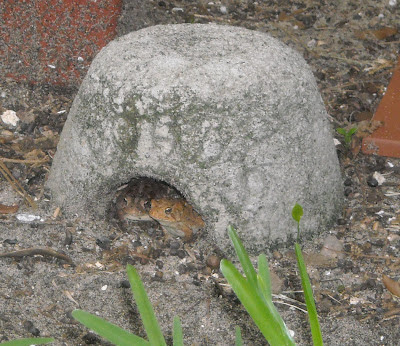 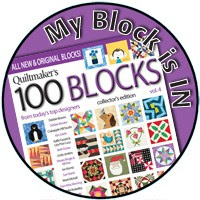